So THEN… we took our children into the Jungle!

Posted on March 4, 2012 by findingnowblog.com

We interrupt our previously scheduled locations list to bring you: OUR DAY IN THE JUNGLE!

Sadly the first few steps of this adventure are not documented with photos, they were at one point, but now…    Ah, Technology. Can’t live without it and can’t afford to throw the computer against the wall.

We’ve really tried to make it a point to have at least one day of Pure Tourist in each of the locations we’ve been scouting. It gives us a chance to see what sort of activities an area offers and provides a much needed respite from the school/apartment/hospital/logistics hunting we do the rest of the time. For Baños, that meant taking advantage of it’s proximity to the Amazon Jungle. After asking around for the best tour operators, and then checking with said operators as to the difficulty level of the one day tour for young children and being assured they could do it “no problema”, we signed ourselves up and had an unbelievable day of jungle fun. Turns out, the youngest children to have done this previously were 10 and 12 year olds. Bo and I were SO PROUD  of our little hikers and explorers (4 and 6!) !! There were hikes and climbs that had the grown-ups gasping for air and our little ones didn’t complain once. Everyone on our tour was impressed. Okay- I’ll stop bragging- it was just really an accomplishment!

We loaded onto a bus with about 6 other tourists with German and Danish accents that were significantly younger than Bo and I and significantly older than Vaughn and Luke and headed out. Took a fairly long drive through dripping rock tunnels and waterfalls on both sides of the road before coming to our first stop at a monkey retreat for animals that were wounded or in need of help in any way.  We were able to get so close to the monkeys! Bo is apparently the Jungle Whisperer, as every animal not in its cage eventually jumped onto his shoulders or into his lap to be held. We all got to have the fun of a monkey climbing on our back, except Luke –he got bitten. His middle finger. I know. Shocking.

We bandaged him up in the van and headed for our next stop, a short walk across an unbelievably unstable bridge to an indigenous village where we had our faces painted with a local fruit’s dye by the chief. The boys weren’t sure at first they were going to go along with that, but ended up so glad they did. Luke was convinced he was a “MegaWarrior” and Vaughn LOVED that his cheeks were now painted in a design that looked A LOT like train tracks. 😉

Back across the shaky bridge and off on a short hike to a jungle lodge where we were treated to a local lunch. And… the pictures pick back up:

Having come into such close contact with so many animals thus far, Vaughn thought perhaps he was meant to pet it.

Meanwhile, Luke’s sopa was drawing an awful lot of attention from one jungle visitor that moved a click or two closer every time he thought we weren’t watching. 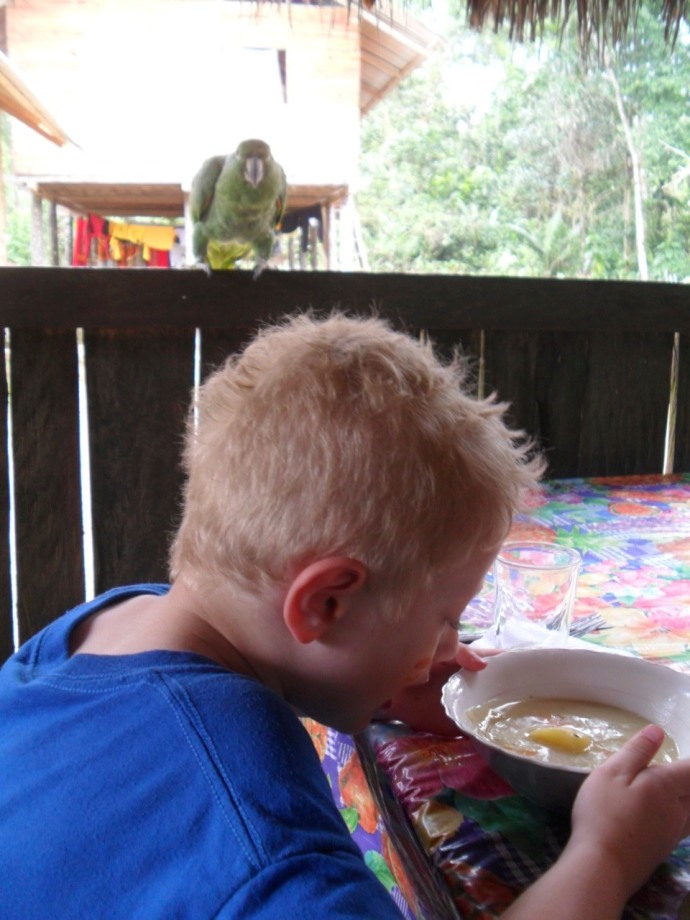 After lunch it was time for the canoe. Our wonderful guides had stopped earlier to pick up children’s life jackets. I did mention that their experience with children was limited to the pre-teen set, yes? Nonetheless, buckled up and on the water we went. 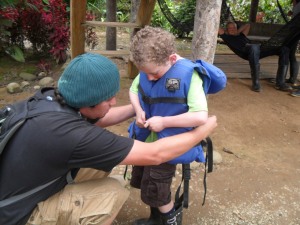 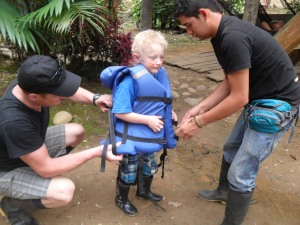 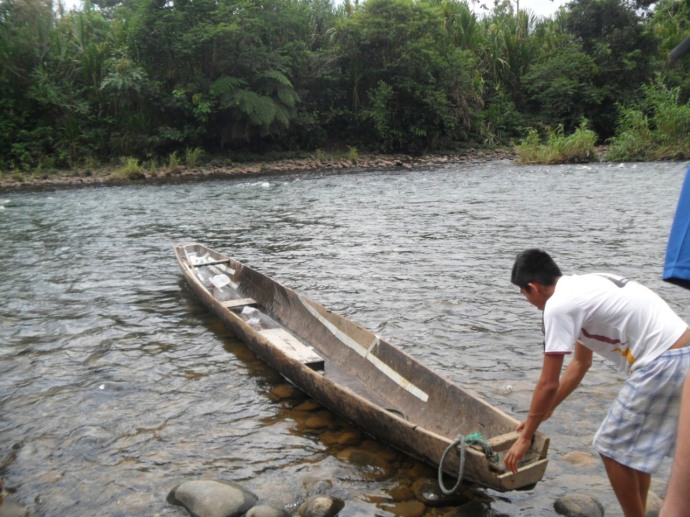 Off the canoe and then straight up to an unbelievable viewpost. 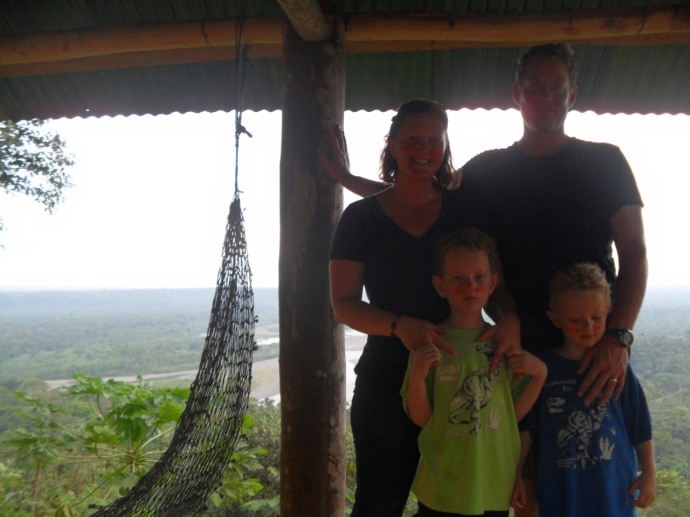 Back down to the road where our van waited to take us to the trailhead of an hour long jungle hike to a beautiful waterfall. At this point in the day, Bo and I were worried if the boys could handle it. As previously mentioned, the did AMAZING. 🙂 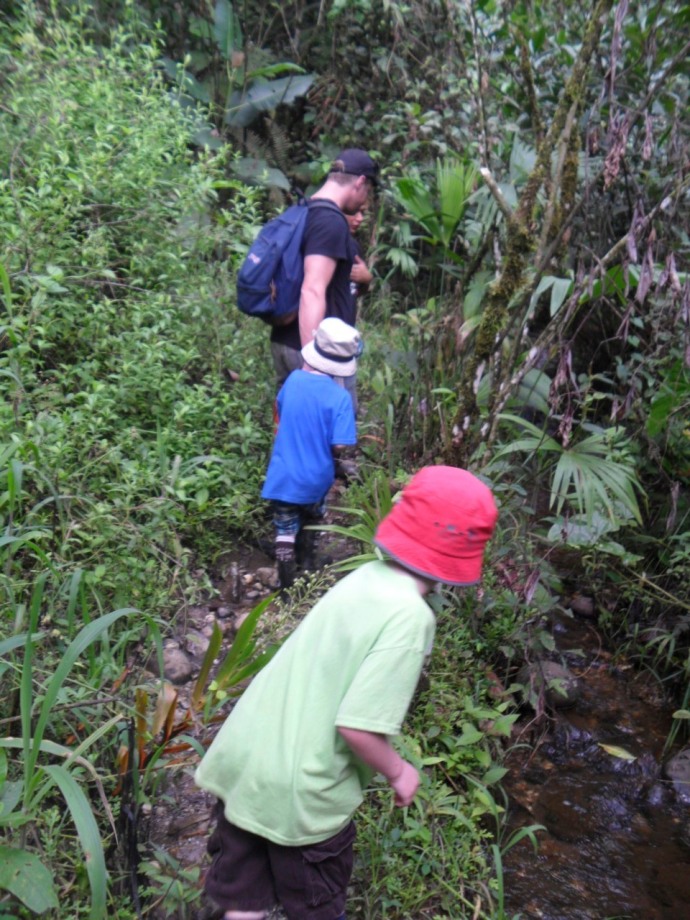 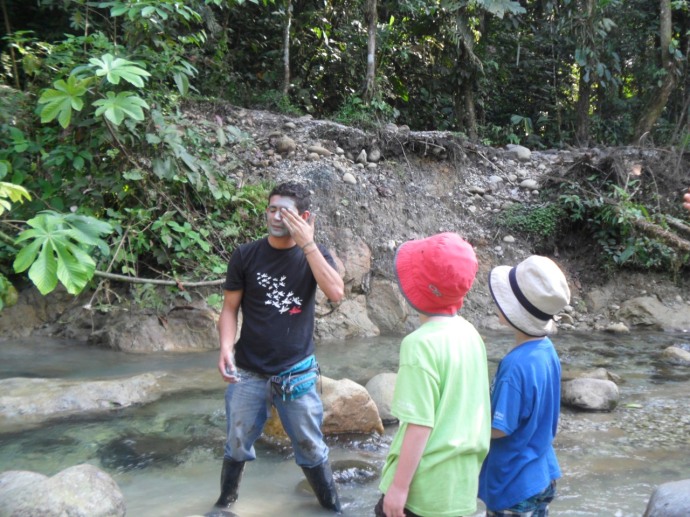 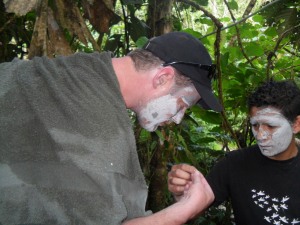 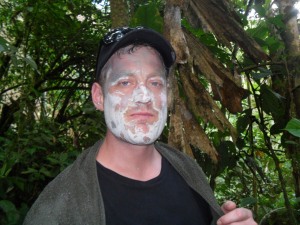 Luis was also great at making disguises out of jungle plants. Super. Cuteness. 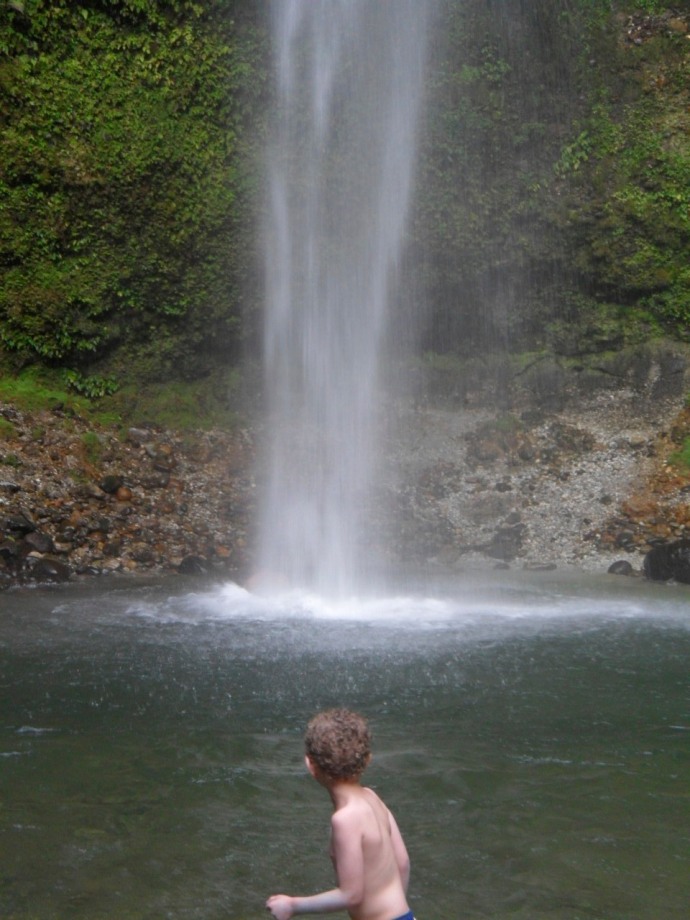 Hike back, load into the van, and…